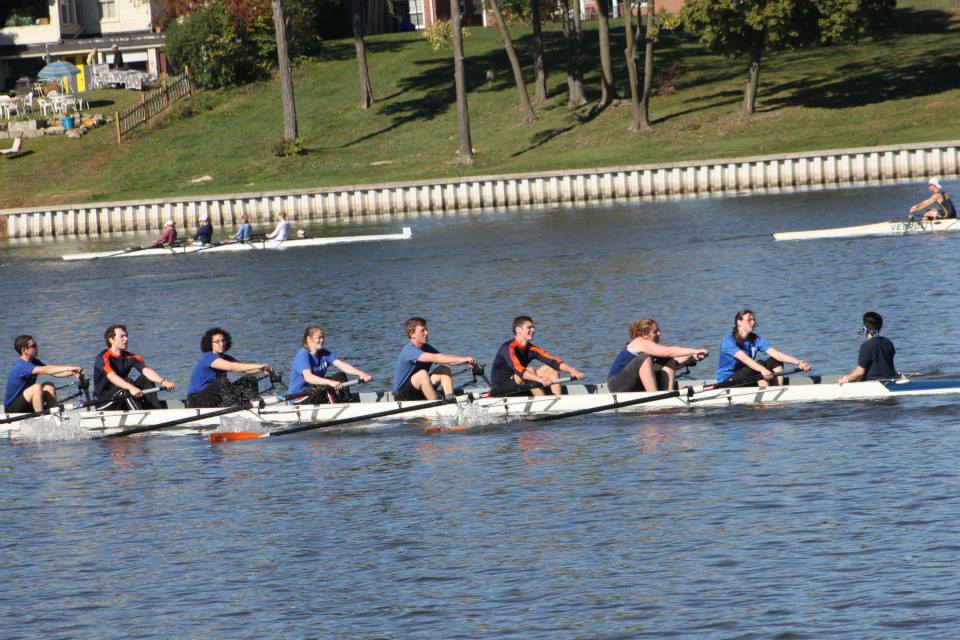 The Fall Crew team rows at the Head of the Rock in Rockford, Illinois in the Mixed 8 event. Photo Courtesy of Bev Cicolello.

The spirit of the spring Coed Club Crew team is opening up the Leonard Center at 6:55 a.m. in order to prepare for a season that may not happen. Nevertheless, one can find the dedicated crew (see what i did there?) rowing on erg machines, lifting weights or circuit training every Monday, Wednesday and Friday.

Currently consisting of 18 committed members, the crew team is split in two: the novices and the varsity. Varsity members prepare for and compete in regattas, while novices spend at least the first portion of their seasons getting comfortable enough with the technicalities of rowing in order to be able to thrive on the water. After a semester spent on the novice squad, rowers are promoted to varsity, and once promoted, they never go back. The number of incoming rowers with experience is always low, as only three girls this year were able to make the immediate jump to varsity.

The fate of the crew team’s upcoming season is entirely dependent on when the winter ends. The frozen rivers of the Midwest can last far into April, and “even if the snow melts, the water is really high and it’s dangerous,” co-captain Jake Waxman ’14 said. Money is especially sparse for the club team during the second semester, as it is more sensible for them to spend their limited funds on the fall’s guaranteed regattas rather than holding out for matches in the spring that may never happen.

Co-captains Claire Finn ’14, Waxman and Margot White ’14 have only experienced one spring season over previous three years on the team. The freakishly early Spring of 2012 allowed them to compete in one regatta. “We managed to get to the race in pouring rain, lost to the varsity teams and crushed the club teams,” White said about her only career spring race.

Given the uncertainty of the weather, “Our strength as a team is the fall races because we have a guaranteed season,” Waxman said. They traditionally compete in three races during the first semester: the Head of the Des Moines, the Head of the Rock (which takes place in Rockford, Illinois) and their home race, the Head of the Mississippi. These races are five-kilometer time trials that favor endurance, whereas spring races come in the form of two-kilometer sprints that cater more toward power. “In the fall you’re exposed to a lot more, like turns in the river, so the team has to know itself well,” Waxman said.

The fall campaign was a success in the eyes of the captains. White noted that the highlight of the season was everyone on the team, save one, receiving a medal in Des Moines. “We had a strong season, we braved the weather and we won a couple medals,” Waxman added. In these races the team competes against a mix of NCAA recognized and other club squads.

Yet the fall season had its complications too. The team’s novice coach left suddenly in August for a job in New Zealand, and six other teams in the area were already searching for coaches. As the captains were already functioning as the coaches of the varsity team, they had no choice but to spend the fall season without a novice team.

These challenges, however, do not stop the captains from running their team like “a high functioning club team that parallels varsity sports” in Waxman’s words. When they do have a coach, the coach shows up to their races, but the captains run practices and arrange all logistics surrounding trips.

Two weeks into the varsity practice season, the captains hope they will be able to make it out on the water at least one more time before graduation. “I think that’s what everyone looks forward to in the spring because the joy in rowing really comes from being in a boat on the water with your team, not training on an erg,” Finn said in regards to returning to the Mississippi.

Should weather treat the rowers kindly, they have enough money to row in one regatta before the semester ends: the “Husky Sprints” at St. Cloud State University. Waxman and White noted that the winner of the sprints receive a box full of medals, something they certainly see as worth striving for. “Getting on the water is our top goal, but winning at the Husky Sprints would be the best way for me to end my senior year,” Waxman said. Should they win, they will follow in the crew tradition of throwing the coxswain, the team member in charge of steering, into the water.

Despite the uncertainty of whether or not they will actually get to race, team members find satisfaction in just practicing. “Seeing the Twin Cities come alive at sunrise [from the Mississippi River] is one of the things I like most about my time on the crew team here,” Waxman said.