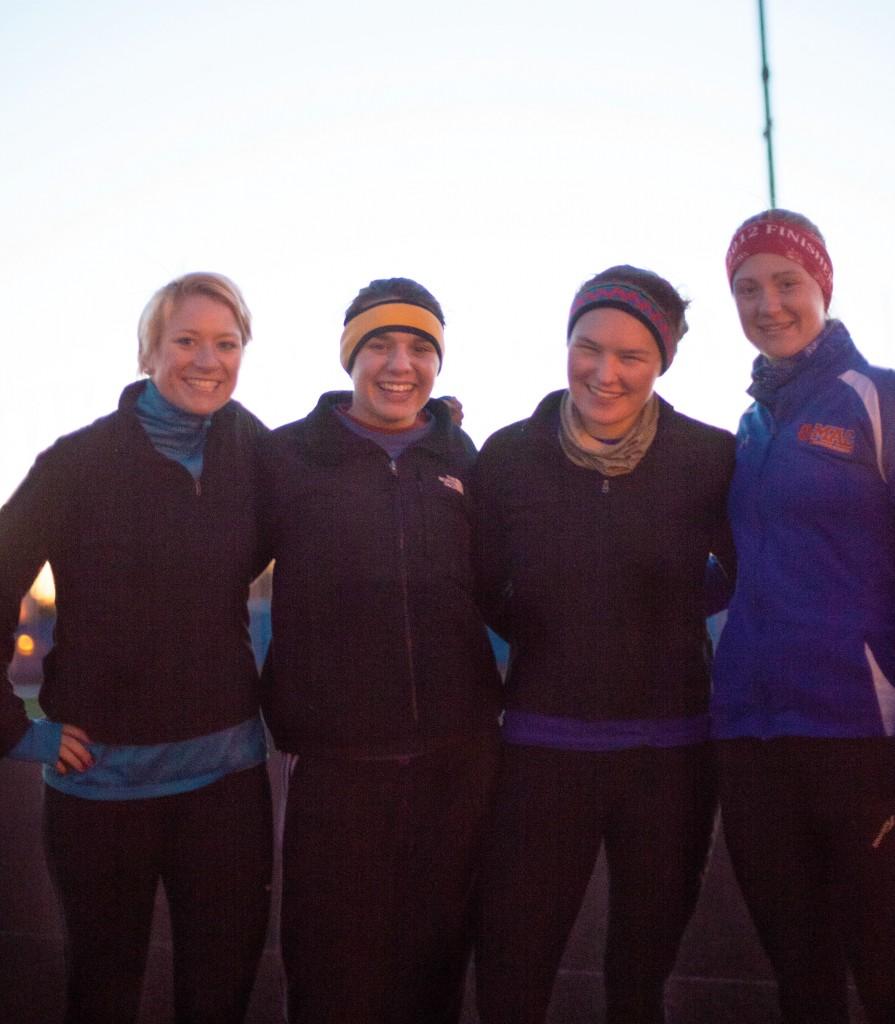 The Macalester Triathlon Club capped off its fall season with an on-campus triathlon last Sunday. Photo by Will Matsuda ’15.

For Macalester Triathlon Club captain Natalie Heneghan ’14, the swim is the best part of a triathlon. Meanwhile, the opposite can be said for co-captain, Maddy Blain ’15. However, despite their divergent views on swimming, the two women joined together this year with the goal of revamping Macalester’s little-known organization.
In Blain’s first year at Macalester, the club consisted of little more than two or three people riding bikes in the Leonard Center every other day. But as a result of Blain’s collaboration with Heneghan, Triathlon Club has gained significant traction this fall, with 16 students (albeit not all of them Triathlon Club members) participating in the on-campus, indoor triathlon that took place on Nov. 3.

The on-campus triathlon, now in its fifth year, was an opportunity for both experienced and amateur athletes to experience a triathlon in a low-key and supportive setting. As opposed to traditional triathlons, which often take hours to complete and occur outside, the on-campus triathlon took place in the Leonard Center and consisted of three ten-minute swimming, running and biking sections. The goal, then, was not to go predetermined distances as fast as possible, but to go as far as possible within predetermined time periods.
According to this year’s Mac Triathlon champion Mark Riegel, the competition offered a “fun, supportive atmosphere,” as students cheered each other on throughout, especially during the swim. Riegel has participated in three on-campus triathlons, as well as several outside of Macalester.

As for winning, he said, “It’s just fun. Everybody pushes through the pain and does their best. Each year it’s interesting to see how the competition changes.”
For Megan Schwartz ’14, participating in the triathlon provided her an endurance challenge to follow her completion of the Twin Cities Marathon.

“It seemed like a good place to assess my strengths and weaknesses in a non-uber competitive environment,” she said. “They lured me with free food. Post-race bagels are a good way to get me anywhere.”

“A lot of people in the club have never done a triathlon before or don’t even know what they are,” Blain said. “We can offer experience and our own passion.”
The group also organizes workouts that focus on the three different categories of the triathlon—swimming, biking, and running. Some of these workshops are led by Men’s Cross Country coach Matt Haugen, who coached the U.S. Olympic triathlon teams from 1997-2000. Haugen stressed that it is especially important for prospective triathletes who have minimal swimming training to get swimming lessons. He also highlighted that, as simple as it might be, running lessons can help athletes immensely in terms of receiving “economy tips on how to move more efficiently.”
“You can get a swim lesson in our tri club in one hour and in running in a half hour and you can improve 50 percent,” he said.

One of Mac Triathlon club’s early events this season was a September trip up to White Bear Lake, Minn. to participate in the One Last Tri competition, the final outdoor triathlon of the fall season. On the long course (800 meter swim, 27 mile bike, 10 kilometer run), Blain finished first of all women (22 participated) and ninth of 64 overall. Heneghan finished not far back, ninth of all women and 34th overall.

On the short course (400 meter swim, 13 mile bike, 5 kilometer run), Macalester alumna and visiting Mathematics and Computer Science assistant professor Lisa Lendway ’03 finished first of all female competitors and second overall. Meanwhile, Paige Moody ’16 finished 68th of 148 women in the race.
“Macalester just cleaned up at this race,” Blain said. “We were all over it.”