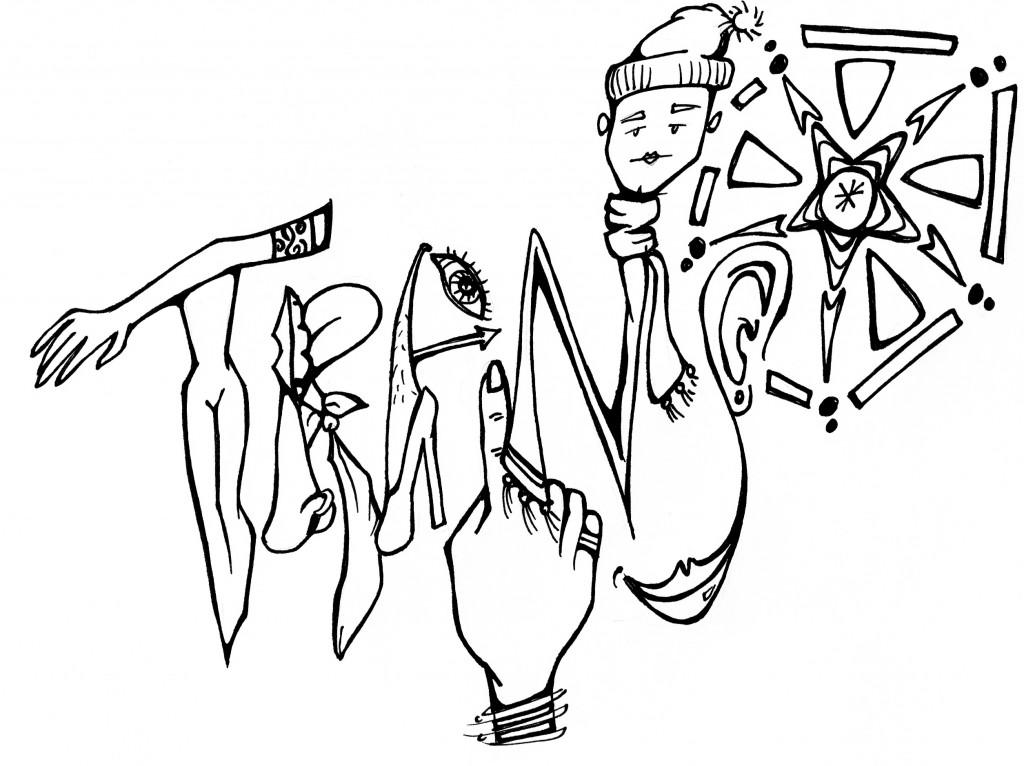 There’s this joke within the kinds of radical queer and allied circles I hang out in about the inclusion of trans* voices in advocacy. It starts with imagining a rectangle wider than it is tall. Within this semi-finite rectangle is all the time and attention society can give issues relating to queer issues and liberation. At the center, shining bright and strong and big, is a “G” for gay. To the left, there is a decently sized “L” for lesbian that is nowhere near as prominent as the G, but can hold its own. To the right of the G there is bisexual’s “B,” small and determined, yet depending on the angle it is easily hidden under the shadow of L and G’s presence. For a moment you think that is all, an L, a G, and a B, but as you turn away a smudge of gray in the corner of the rectangle grabs your attention. There, nearly invisible and shoved aside, is the trans* “T.”

…Okay, so the joke is less funny and more biting criticism, but that’s how I roll.

Historically, there is a lack of prioritization of trans* issues within queer advocacy. There have been a number of civil rights legislation by queer and allied advocacy that remove protections for trans* folk to get their own agendas passed. Even the biggest group dealing with these issues, the Human Rights Campaign, started out with massive campaigns by founders to exclude trans* experiences. (Check out TransGriot’s 2007 “Why The Transgender Community Hates HRC” for more information about this history). The exclusion of trans* voices is a serious issue that extends past queer advocacy. While sex positivity is supposed to be a positive and encompassing movement, it is not exempt from exclusionary tactics.

Usually this is the point when I quietly transition from the opening to a section defining and/or breaking down useful vocabulary. While I am still going to use a variation of this format, I do not want to do so uncritically this week. Sexy Mac deals with sexual and romantic health, and within that, the sexualities of various different communities. To uncritically define trans*ness as extensively as I will without doing so for every group I mention makes me queasy; queasy, because that would conflate gender difference with sexuality and sexual/romantic difference. They are not the same.

A sexuality-centered campaign, for example, is one that focuses on letting people be in sexual and/or romantic relationships with someone of any gender. While it may include trans* folk, it does not mean you are fighting for trans* specific issues, which are completely different because they center on gender. Conflating sexuality and gender obscures this difference and facilitates trans* erasure.

So, when I define trans* ness in this column, it is not because I aim to make this conflation. Instead, it is because I want to unrelate them. I understand that some readers might not understand what trans* means, and I want to make sure Sexy Mac can be an entry point into sex positivity for people with many different levels of knowledge.

Sometimes that means stepping away from the limits of what I imagine the column to be, and I think this is an important enough cause to do so. While I hope all my articles contain room for and name trans* experiences, I do not think I am doing my job as an educator or advocate if people are still confused by transness because I only give glimpses into what that encapsulates. In understanding what trans can mean, we can move onto more complex discussions of how the trans* experience affects a potentially sexual and/or romantic agent.

With all that disclaimed, I turn to the question: what is “trans* ,” and why the hell is there an asterisk stuck on there? Honestly, it will always be impossible to give a fully comprehensive answer, but I can give a working definition that works with many (but not all) conceptions of trans* ness. A trans* experience is a state in which your specific formation of gender, gendered presentation, and/or sex do not align with societal expectations of a gendered and sexed body at birth.

To break this down further: Sex is a generalized description of a person’s biological parts, such as gonads, genitals, chromosomes and hormones. Male, female and intersex are sexes. A person can be labeled intersex when their biological parts cannot be marked distinctly as male or female. Because there is an urge to have simple sexes, many intersex people face the early trauma of having their genitals operated on (aka, surgically mutilated) soon after birth so their parents and doctors can label them within the sex binary. The urge for a sex binary of male/female has a lot to do with supporting a gender binary of woman/man. Gender is the description that gives the social, political, historical, psychological and cultural context for our trained/untrained behaviors, codes and roles. So, women are expected to be “feminine” and men “masculine,” but what actually constitutes women, men, femininity and masculinity are arbitrary at best and do not include gendered presentations outside the binaries I’ve set up so far.

It is important to note that these behaviors are usually initially projected from the sex assigned at birth. “It’s a Girl/Boy!” announcements for an unborn child show that we project a baby’s gender even in the womb. When your projected gender relates to the expectation based on your sex at birth (woman from female), you are cisgender. When this isn’t the case, you are trans*. What I want to quickly dispel is the idea that trans* is simple, and here’s where that asterisk comes in. While not everyone and not all trans* folk use the asterisk, I and others use it to denote the range of identities within the trans* umbrella. Transsexual, transgender, genderqueer, androgyne, bigender, two-spirit and agender are all trans* identities that mean very different things to very different people. I could give you a summary of what the identities usually mean: agender people may not identify with a gender or identify outside gender; transsexual can mean identifying with a sex different from the one designated at birth (and with that, usually gender as well).

I could do that, but I won’t because I don’t think that would be helpful for now, and because you can (and should) look them all up easily. Instead, I will use my time with wrapping up with a step back to the big picture and my purpose in defining. Sex positivity needs to be a space for trans* folk because they are just as much potential sexual and/or romantic agents as a man or woman. We cannot just assume that because they are people or are mentioned in an acronym that trans* voices and experiences are actually heard. How we include trans* -ness centers, for me, on acknowledgment and respect. Acknowledge that gender and sex are not stable, nor are they binaries. Respect every person’s identity, pronouns, name, body, presentation, choice to be out or not, right to consent, and right to think you are an ignorant trans* phobic fool when you say something hurtful. Acknowledge that you need to be challenged about gender and sex, and finally, respect the knowledge, time and patience you gain in every interaction you have.