Arabic program grows in popularity and size: Students involved in determining the future of the department 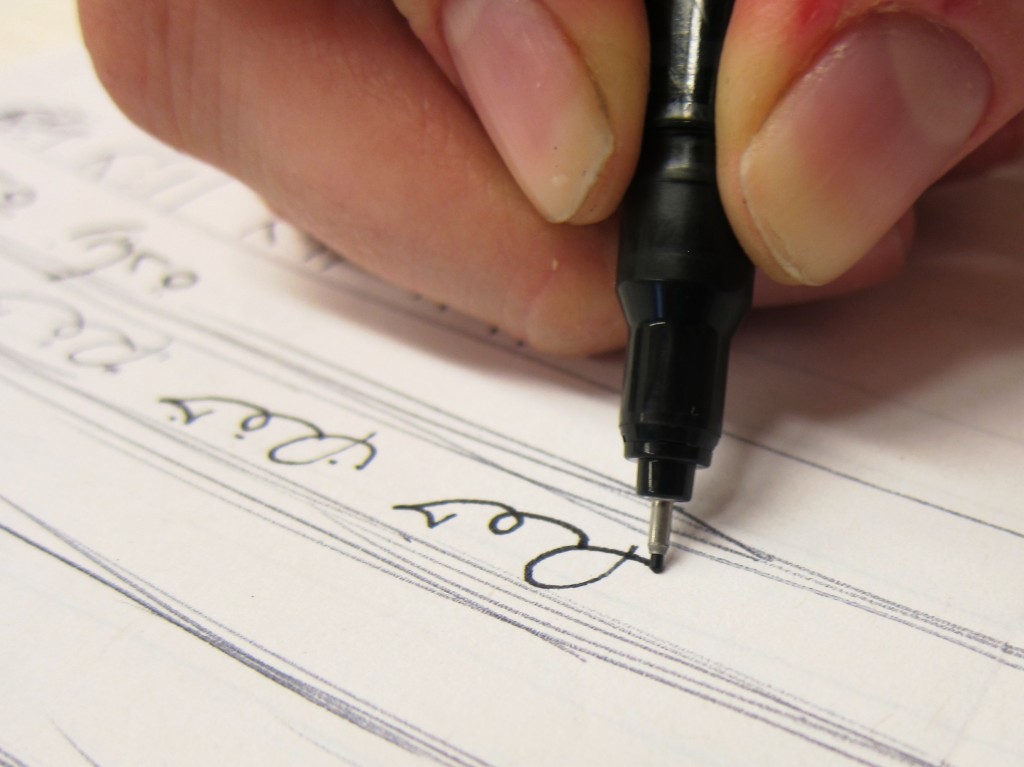 Arabic major Sophie Nikitas ’14 practices writing Arabic abjad. She is one of the first Arabic majors in the growing program at Macalester. Photo by Naomi Guttman ’16.

When Hannah Evans ‘14 was applying to colleges, she was drawn to Macalester because of its strong Arabic program. A few years later, Evans has taken all the Arabic language classes offered at Macalester and is on her way to becoming one of the Classics department’s first majors specializing in Arabic.

“I was looking at Arabic,” Evans said, “and the fact that Macalester had it was good, and it had more than three years of it, at the time.”
Although Macalester’s Arabic program is still fairly new and relatively small, it is quickly establishing itself as one of the fastest-growing programs on campus, and the increased interest in it shows no signs of slowing down.

Arabic was added as the 11th language Macalester offered, and the fourth language in the Classics department six years ago with the hiring of Antoine Meflech as an Arabic instructor. Since then, the program has expanded in size and popularity as growing numbers of students recognize the importance of Arabic in a global setting and familiarize themselves with Macalester’s offerings.

“There’s certainly no shortage of interest,” Classics Department chair Andy Overman said. “Along with a couple other languages on campus, I think Arabic, for obvious reasons, is one of the critical languages to study these days.”

“The language and culture is so relevant nowadays, and I think it’s super important that other people have access to learning about the culture,” Claire Mercer ‘16 said. “It would be really beneficial, not just to people in the department, but to the campus as a whole, to expand the program.”

According to Overman, approximately six students are pursuing a Classics major with an Arabic focus. Around 60 students are involved in the program currently; upwards of 30 are enrolled in Elementary Arabic I, around 20 in the intermediate-level course, and around 10 are taking an independent study with Wessam El-Meligi, the department’s professor specializing in Arabic instruction.

Before returning to Macalester, El-Meligi was a professor of English Literature at the University of Alexandria, where he became involved in the Egyptian Revolution and the Arab Spring. This is El-Meligi’s second year as a full member of the Classics department, but he was previously at Macalester five years ago on a Fulbright fellowship.
Many credit him for increasing interest in the Arabic program.

“Wessam is incredible,” Mercer said. “We’re really lucky to have someone like him who has so much experience teaching the language. He’s really interested in students taking the lead and building things for themselves and forming their education; that’s something that he’s really driven us to want to expand.”

Interest in the Arabic program is enormous, according to Overman. The increasing number of students that are choosing to focus their major in Arabic has led to increased growth in affiliated study abroad programs and broader “context courses” that are required for the major and seek to increase cultural understanding of the Arabic world.

“Some of the study abroad options in the Middle Eastern world and North African world have been very popular,” said Overman.

Much of the growth and expansion of the Arabic program has been fueled by students; last year, a group, led by Irene Gibson ‘15 and Overman, organized the Arabic Board, a committee of students and professors that sought to explore ways that the program could expand to the greater student body.

“I noticed a strong desire within the Arabic classes to increase the number of opportunities within Arabic and Middle Eastern Studies,” Gibson said, “yet to our collective frustration, nobody had acted upon this willingness and diversity of ideas.”

The department hired their first native-speaker lab instructor, Abeer Yakout, this year. In addition, students that are native Arabic speakers also serve as preceptors and run a few of the lab sessions themselves.

According to David Goldstein ‘16, that expanded interest has also carried over to co-curriculars; organizations such as the Middle Eastern and North African Association (MENAA) and Mac HOPE, which both have a vested interest in issues in the Middle East and Arab World, have expanded recently. MENAA, which Goldstein is a co-chair of, has seen itself revitalized under new leadership, and Mac HOPE was chartered just last year.

One future goal for the Arabic program is to have a dedicated on-campus living space. There is currently no space for a full-fledged language house, but the Arabic Board is exploring options, such as a section of Kirk, that could be designated as an Arabic living area.

“We have talked quite a bit about a space within a dorm that could constitute an Arabic language part of a floor for those who would be interested in that kind of Arabic language experience,”
Overman said. “This is an idea that has real merit.”

Students involved in the program sounded supportive of the idea as well.

“That’s something that has potential to grow – I think an Arabic language section would be really neat,” said Bowman.

The administration has been receptive to the Arabic program’s expansion, and supports its continued growth in the future.

“We’re pleased to see the student interest in Arabic. Clearly Professor El-Meligi is doing a great job, and students appreciate their work with him. I am working closely with the faculty in the
Classics department to think through next steps with the program,” said Acting President Kathy Murray.

The future of the Arabic program at Macalester looks to be strong, and sufficient interest exists to keep it going for the foreseeable future.

“The fact that we have a new lab instructor, the fact that Wessam is here for the long run … and the fact that people are really excited for it, getting behind and advocating it — they’re all really important things,” said Evans. “And the fact that this is all happening within the first five years of its existence … it’s because Arabic is becoming more and more relevant and in-demand.”