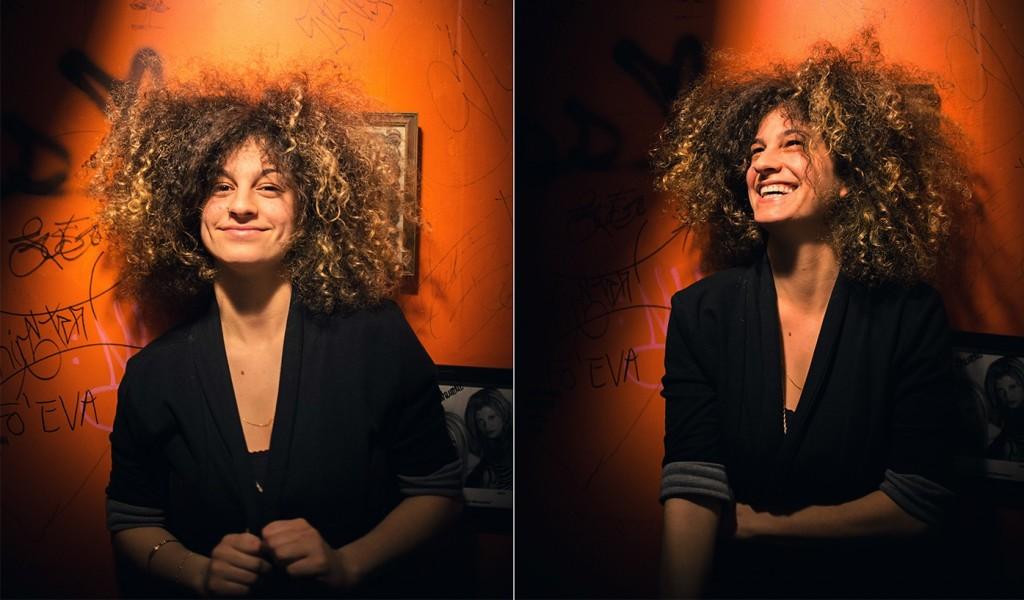 Eberzon ’12 performs at venues around the Twin Cities, drawing attention for her voice as well as her commitment to peacebuilding. Photo courtesy of BryanB Photography.

When Israeli-born singer-songwriter-activist Shahar Eberzon graduated from Macalester in 2012, she knew that she wanted three things.

Two years ago, in the midst of her senior year, Eberzon (fondly known as “Shahair” in her college days) was the reigning Mac Idol, the co-founder of the Shalaam Coalition, and one of the key founders/organizers of Israel-Palestine week. As an employee of International Student Programs, Shahar had helped to start the Ametrica program, and in 2012 she won Macalester’s Global Citizenship Student Award. Shahar left Mac as an
International Studies/Sociology double major.

Now, she says her path connects much less clearly to her academic history.
“If somebody would look at me from the outside they’d be like, ‘Oh, she’s not using her degree,’ but that’s not true at all, because music is my sociology,” she said. “I wouldn’t be able to sing about the things that I think about, wouldn’t be able to talk about these things, I wouldn’t be able to use the privileges that I’m given of being heard on stage if it wasn’t for Macalester.”

Most of her life, Eberzon followed an academic track. Growing up in Beer-Sheva, Israel, her parents paid for guitar lessons, but they did not necessarily encourage a musical path beyond playing and singing with friends. Eberzon attended the United World College of the Adriatic in Italy on a scholarship before coming to Mac.

“I said, ‘I’m not a model, but I can sing,’ and Amanda said ‘Ok, sing for me,’ ” Eberzon explained. “So then I just belted ‘Endangered Species,’ [over the phone, Shahar actually belted the first lines of the song] and then she really got quiet and then she was like, OK, you’re in. She was I think the first person to really believe in me and in this path.”

It has not been an easy one. Eberzon, as a lawful immigrant, operates on a small budget, thousands of miles away from fellow human rights activists, friends and family who are still crucial parts of her life. She Skypes them frequently, especially on holidays, but is thrown when two of her 11 nieces and nephews, whom she only knew as babies, don’t recognize her.

As an outspoken peace activist, Eberzon also admits to the painful reality of saying things that hurt people she cares about, who at times outwardly resent her commitment to peace.

She recalls a story, sitting in a bomb shelter with her friends, “and they’re saying something to the effect of, ‘Oh, what do you think about peace right now?’ ”
The best way for Eberzon to communicate her passion for peace is through her music. She hopes to ignite a spark in others when she sings, to “open a space where people can explore the Israeli-Palestinian conflict and the Middle East and themselves and their identity.”

“You have a choice when you’re onstage—you can use this music to do good, or you can use it to do evil,” Eberzon said reflectively. “I’m really trying to use this huge, amazing privilege that I’m given to be onstage to be good.”

Shahar is looking forward to recording a CD this winter, and potentially going on tour or to grad school. An idea called “The Grandma Project” is also in the works, sprouting from Shahar’s grandmother’s “essential role in everything that I do.”

Eberzon grew up listening to her grandmother’s stories, which all the children and grandchildren in Shahar’s family know by heart, and the old Iraqi songs that her grandmother used to sing. Eberzon started performing one of them in the States recently to honor her grandma—only after she received her grandma’s blessing and tutoring, of course.

As challenging as it can be, Shahar Eberzon feels extremely grateful for her life at
the moment.

“Every day [when I wake up], I need to make a decision to keep on going or give up,” she said. “I have to constantly be thankful for the people around me, who are constantly reminding me when I forget, that there is a path for me, and that I need to raise my voice, and I need to sing.”