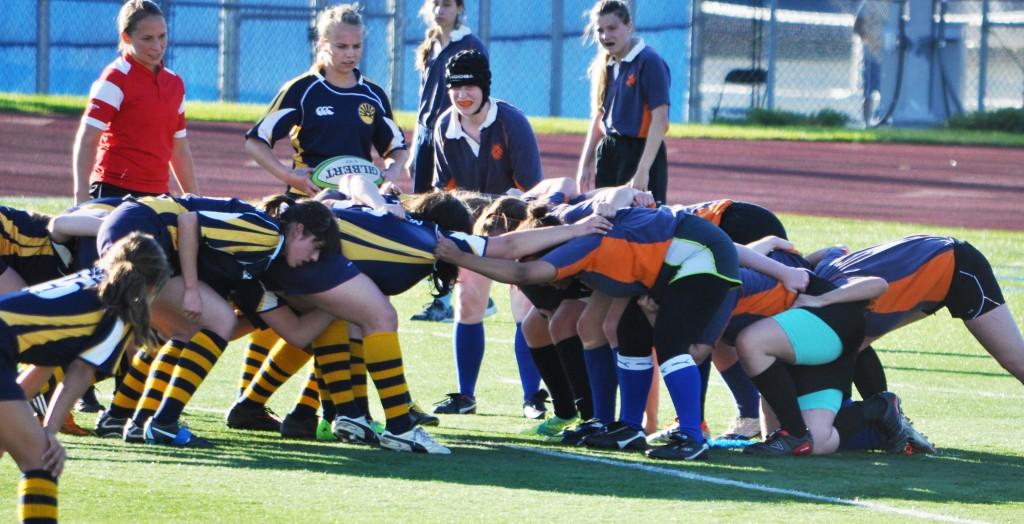 While women’s rugby is not exactly sweeping the nation with popularity, it has certainly found a home in liberal arts schools around the country, and Macalester is lucky to be included as one of the schools where rugby has taken hold. Women’s rugby is one of the many competitive club sports available at Macalester. The squad has gotten off to a 1-2 start with games scheduled through mid-October. The team also scrimmages St. Thomas throughout the season, benefitting from the proximity of our neighbors to the west. One thing is clear about Mac women’s rugby: while there is not loads of experience on the team, the players love it.

“Rugby’s an amazing sport – it requires 100 percent focus when you’re on the pitch, but it also allows for a lot of creativity. There are so many ways that every single play could go,” said Tori Lewis ‘15.

“We all get to collectively decide how it will play out. It’s pretty cool.”

The team gets to play against teams from all over the state–whether they are playing at Macalester Stadium or in Faribault, MN. In a given year the team will usually play UW River Falls, Sioux Falls (new this year), Augustana, St Olaf, Luther College, and Carleton. The league schedule is determined by USA Rugby.

“It is a fast-paced, total team sport that is both mentally and physically demanding,” said Assistant Coach Sarah Heimel.

Many Mac students who participate in club sports were at one point athletes in high school. Rugby, like other club sports, can provide that extra camaraderie that is absent in other facets of life at Mac.

“My favorite part of women’s rugby is the community,” said co-captain Nora Spellane ‘16. “This semester more than ever, we’ve really bonded and cohered as a team, and every day the feeling of love and support is palpable. I know that every single one of these women have my back, and I have theirs.”

“I also love the rugby outlook,” she said. “Everyone’s really intense on the pitch and calling for your best efforts, but as soon as you step off, there’s so much love and acceptance. Players on the other team are instant friends. I mean, you’ve got to respect people that are willing to do the same crazy [stuff] you’re doing.”

The team has only played three games thus far this season, but the women have kept a positive attitude with regards to the evident inexperience of the group.

“I consider this year’s team to be great athletes and eager students of the game with a lot of potential, though the team as a whole does not have much experience with the sport of rugby,” Heimel said. “There’s so much to teach about the game, so it is challenging to only have three hours of practice a week.”

Echoing Heimel, Spellane said that, “This year’s team is a lot of rookies and less experienced players, which is fun because there’s a lot of teaching that improves everyone’s game. Everyone is so excited and energetic, and there’s always a lot of laughter at practice.”

Attendance has been up this year. The team expects to play every game possible, but getting proper numbers can be a challenge. Teams usually play with 15 players and subs, but Mac usually fields 12 or 13 (12 is needed to play).

WHY RUGBY IS DIFFERENT

It is important to note that women’s rugby is a bit different than other sports, in that it transcends some traditional stereotypes about women’s sports.

“As a woman, I also love that the sport gives female athletes a venue to be more aggressive than we are normally allowed by society. You learn how much you are truly capable of by playing rugby,” Heimel said.

Jesse Cutter ‘15 enjoys the physical, yet safe, nature of the game, which many other women’s sports don’t provide.

“I personally like rugby because it’s different from other sports in that men’s rugby and women’s rugby is the exact same game – there is no difference in rules, ball size/field size, or length of game,” she said. “It’s also super fun because you get to hit people, but in a controlled way that rarely results in the head injuries we see in football.”

Spellane also spoke about the uniqueness and safeness of women’s rugby at Macalester. “We emphasize safety first and, because of that, we find a way to make an intense game fun and accessible,” she said.

“Plus, tackling is a mighty fine stress reliever,” she added.