Football to join Midwest Conference in 2014; players and coaches excited 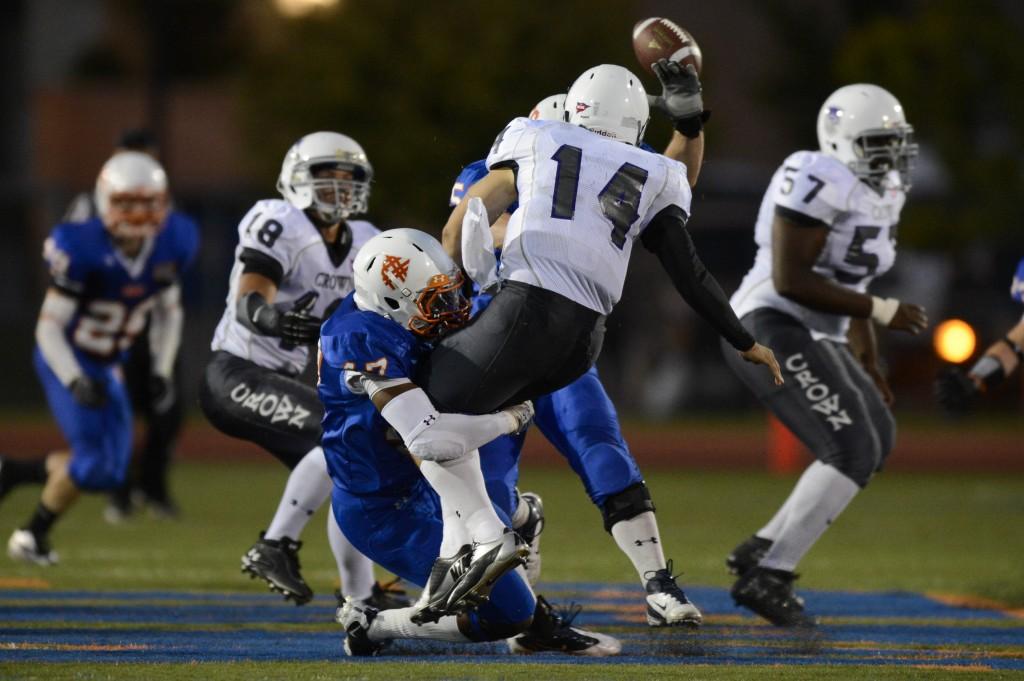 Reid Callahan ’14 brings down the opposing quarterback in a game against Crown College on Sept. 1. As members of the Midwest Conference, Callahan’s Scots will play a consistent schedule for years to come starting in the fall of 2014.

As of last Wednesday, the Macalester football team became the newest member of the Midwest Conference (MWC). The Scots are set to join the conference in the fall of 2014, ending a 12-year period where they were playing as an independent team.

“The Midwest Conference will be a step up in terms of competition from what we have been playing as an independent. The conference will just be more consistent week in and week out,” said sixth year head football coach Tony Jennison.

As the newest member of the MWC, the Scots will be taking part in a conference with schools from Illinois, Wisconsin and Iowa. Member schools are Beloit, Carroll, Cornell, Grinnell, Illinois College, Knox, Lake Forest, Lawrence, Monmouth, Ripon and St. Norbert. The conference is made up of two divisions, the North and South divisions. Macalester will join Beloit, Carroll, Lawrence, Ripon, and St. Norbert in the North division. The idea of being in a conference is appealing for players, coaches and fans.

“I think it will help in terms of recruiting, where new potential Mac football players will be drawn to a program that has the chance to compete for playoff appearances every year,” offensive lineman Adam Bauer ’14 (Auburndale, WI) said .

Part of the logic behind this transition is that the Scots will be able to develop rivalries and a consistent schedule from year to year. Playing as an independent was a challenge logistically.

“The change was made because it was becoming quite obvious that we couldn’t sustain the independent schedule for much longer. Take this past season for example…we had to fly to Oregon to get a tenth game, not easy on our budget or my stress level,” Jennison added.

As soon as the Scots are part of the MWC, they will have a chance to play the NCAA Division III national tournament, something they were not eligible for as an independent. Mac football players will also be eligible to win postseason awards. It is also logical to think that a larger student contingent will begin to attend more games than in past years as rivalries develop and the stakes become higher. Safe to say, the players are excited.

“I could not be more excited about the change,” cornerback Konnor Fleming ’15 (Charlotte, VT) said. “As a program on the rise, I along with the whole team have been looking for an opportunity to show the Macalester community as well as the rest of the nation just what this football program is capable of. We’ve got guys busting their asses in the weight room three or four times a week, and the amount of drive and determination on this team is unrivaled.”

Linebacker Jesse Russell ’14 (Eden Prairie, MN) echoed his teammate’s sentiments. “As someone who came here after we had left the MIAC, the goal in my mind was always to improve the team enough that we could rejoin and compete in another conference,” Russell said. “While I will never play in the new conference, I am very grateful for the work done by President Rosenberg and everyone else in both the administration and the athletics office who made this possible for our team.”

With this move to the MWC, it seems like the football team is continuing to move up in stature. After failing to record a winning season in ten years, the Scots have recorded two in the past three years. Hopefully, this upward trend continues into a future MWC conference title for the Scots.