The Mac Weekly • May 3, 2013 • https://themacweekly.com/65257/features/spring-style-guide-mac-weekly-staff-inspired-by-iron-man-pbr/ 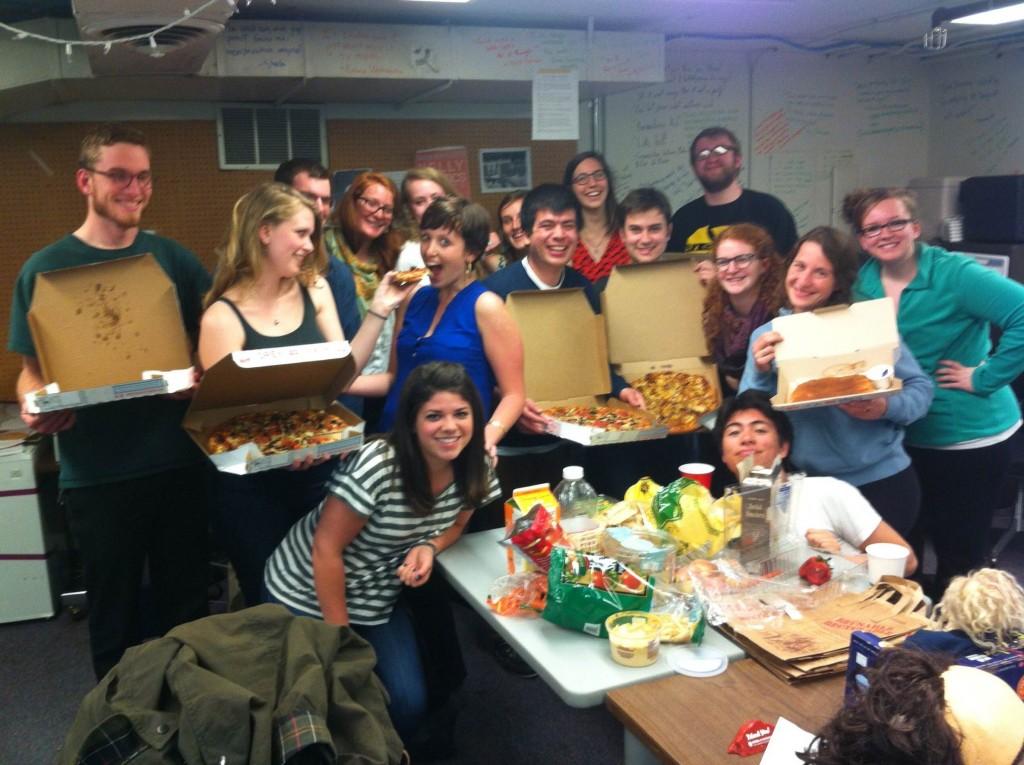 The staff of The Mac Weekly deludes itself into thinking that it is one of the most chic student orgs on campus. Between Richard Raya ’15 (a style icon best known for his Levi’s jean jacket), Sarah Krumholz ’13 (a fashionista with multiple pairs of pastel-colored corduroys) and Lora Hlavsa ’13 (who is in an entirely different class fashion-wise from the rest of the school), TMW has no shortage of members who dress to impress. I recently had the opportunity to talk with a few members on staff and discuss Macalester style, Paris Fashion Week and Rob Kardashian.

Lora Hlavsa: Whatever the first month of spring is, which could be anything from March to June. This is Minnesota after all…

Jonathan McJunkin: Winter months, because my winter coat is probably the nicest piece of clothing I own.

Naomi Guttman: Autumn. The colors are the best, and it’s that ambiguous weather where you can wear pants or shorts. And it’s fun to be able to wear clothes without getting sweaty in them.

Sara Staszak: Probably October. I really enjoy not having to worry about if wearing orange and black is too Halloween-y.

Sophie Nikitas: October. I own a lot of light jackets.

Amy Lebowitz: I also own a lot of light jackets, so I will wear them in October with Sophie.

How would you describe Macalester’s style?

Amy Lebowitz: I can’t adequately describe it because I’ve been immersed in it all year. But when I go home to bland suburbia, and people look at me funny because I’m wearing some drapey shit and I’m mildly, self-consciously appropriating some culture, I get a better sense of the situation.

Anna Pickrell: I probably can’t describe it as well as Jonathan Franzen can, but I guess there’s a lot more plaid than most places.

What’s your favorite outfit that you own?

Lora Hlavsa: I am pretty fond of my rainbow windbreaker that I bought for a theme party. Now I just wear it in day-to-day life. #NORSY

Hank Hansen: A pair of short shorts with geckos on them. I got them used and the previous owner probably weighed 250+, because the elastic waist is way too big for me. That’s the whole outfit. And maybe some Birkenstocks.

Sophie Nikitas: I made this T-shirt that says, “I Heart Aaron”… I wear it under all my clothes.

Amy Lebowitz: Anything allowing me to wear a bandeau, also known as a samurai boob wrap.

Anna Pickrell: My high school track sweatshirt, just because it says DON’T MESS on the back.

Sarah Staszak: My Mickey Mouse golfing sweater. I don’t golf, but it is cozy and low maintenance.

Which celebrity would you say best approximates your style, Suri Cruise or Rob Kardashian?

Shasta Webb: I have no idea who either of those people are.

Jonathan McJunkin: I don’t know who these people are.

Hank Hansen: I don’t know what that means.

Sophie Nikitas: Suri Cruise. I always dress like I’m going to be photographed while Joey Potter takes me to froyo.

Amy Lebowitz: Suri would renounce me on account of my hair color and admiration of Amy Poehler, and I renounce the Kardashians except Kris Jenner (shout-out to Emma WR).

Sarah Krumholz: Nothing says style like having a tattoo of your mom’s face on your calf, so I’ll have to say Rob.

Anna Pickrell: I have moral issues with both of those people, so no.

Sara Staszak: I guess Suri Cruise because she’s probably too young to really care about fashion, and I don’t really know things either.

If you were to give one style tip to aspiring fashionistas, what would it be?

Shasta Webb: My sprint coach told our team that the best three materials for clothing are linen, wool and bamboo. I suppose I would pass that along to ‘aspiring fashionistas’ though I don’t entirely understand who those people are…

Jonathan McJunkin: People tend to like bright colors I think? Maybe do that.

Nate Williams: Treat yo’ self.

Lindsey Smith: Less is more, nothing is better.

Heather Johansen: The messy-bun is timeless.

If you were to go to Paris Fashion Week this fall and had an unlimited budget, what outfit would you design for yourself?

Hank Hansen: Aforementioned gecko shorts, but with a smaller waist.

Jonathan McJunkin: One of those awesome wing-suits that you can jump off buildings and glide with, which is also an actual suit.

Naomi Guttman: Something so I could fly.

What style do you see coming back in vogue this summer?

Richard Raya: Suits and shit and a sexy combed back fade. I dunno, what with Gatsby and Robin Thicke and whatnot.

Sarah Krumholz: I don’t care what comes back in vogue just as long as rompers stop being even close to in vogue.

Ivy Bardaglio: If this week is any indication, down coats and winter boots in Minnesota.

If you could swap wardrobes with anyone at Macalester, who would it be?

Hank Hansen: Probably the dude who wears suits all the time, because then I could sell all his suits and use the money for a Savers spree of historic proportions.

Amy Lebowitz: I am usually drawn to things similar to what I already own i.e. off-white shapeless dresses and very contrived patterns, so I could probably have my pick of many wardrobes.

Jonathan McJunkin: I only covet one piece of clothing at Macalester­—­­Richard Raya’s jean jacket.

Sarah Krumholz: Anyone who doesn’t own a romper.

Sophie Nikitas: I will only accept mahogany.

Sophie Keane: Any athlete. Those sweatshirts have to be the comfiest.

Nate Williams: Anyone in the Physics department on Hawaiian shirt day.

Anna Pickrell: Duchess Harris. I mostly want her wedding ring (I hope she doesn’t read this).