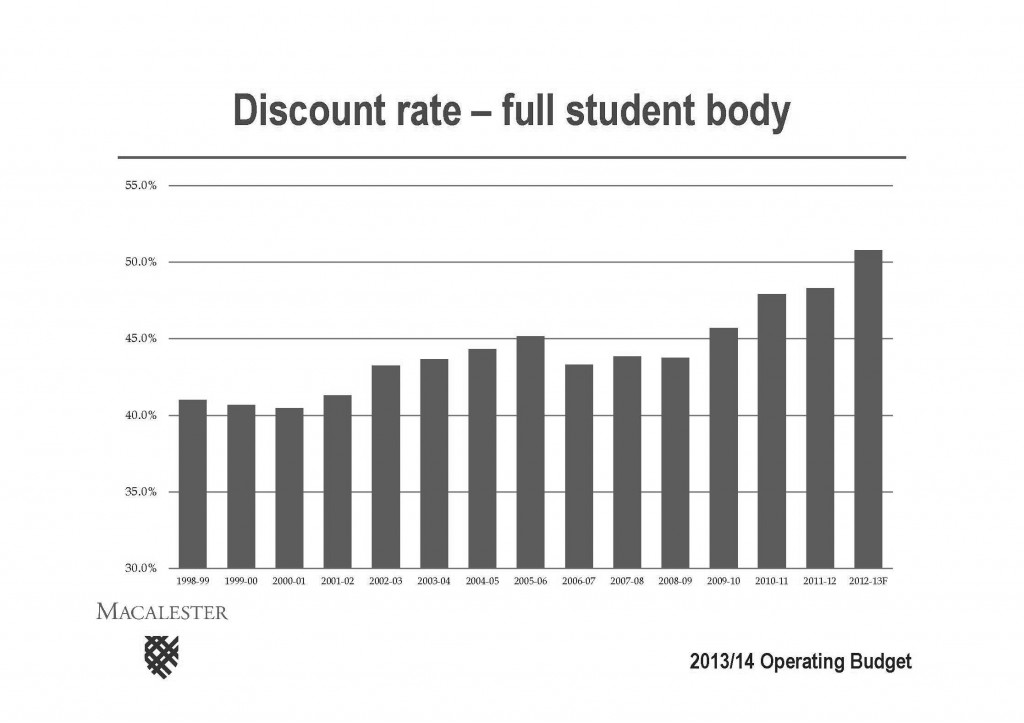 The graph shows the discount rate for the Macalester student body each school year. The graph appeared in David Wheaton’s budget presentation.

Macalester’s budget for the 2013-2014 school year will be submitted to the Board of Trustees for approval at their meeting on May 17. Planning for this budget would have usually included making projections for several years in the future. This year David Wheaton, the Vice President for Administration and Finance, and the rest of the Task Force on the Budget (TFOB) decided to focus only on the year ahead due to uncertainty centered on recent increases in the college’s financial aid expenses.

The College Board defines discount rate as the ratio of total grant aid given to students directly by the college to the total amount of tuition and fees (not including room and board) paid to the college. It is a common measure of the cost of financial aid. Since the 2008 financial crisis, Macalester’s discount rate has remained at or above 50 percent. According to Wheaton, one of the assumptions used when creating budget projections in past years was that this was an anomaly and the rate would fall to below 50 percent as it has been in the past.

Contrary to these predictions, Macalester’s discount rate increased from 50.46 percent for the 2011 entering class (current sophomores) to 54.06 percent for the 2012 entering class (current first-years). This academic year’s budgeted discount rate for the entire student body was 48.2 percent, and the actual discount rate is projected to be 50.8 percent, according to Brian Lindeman, Director of Financial Aid. The financial aid office looks to end the year with $1.5 million less in tuition revenue than they budgeted for.

Wheaton said that he and the rest of TFOB can usually make predictions for future budgets because most factors involved, such as staff and faculty size and tuition increases, remain steady and predictable. This “unexpected and significant” rise in financial aid led him to focus this year’s budget process solely on the year ahead.

“When a really important item like financial aid changes by a noticeable amount, we have a harder time knowing whether a new normal level has been observed, or whether that particular data point is anomalous,” Wheaton wrote in an email. “We’re still trying to figure out what [this year’s] financial aid increase means. This change has a big enough effect on future projections that we decided to hold off on decision-making based on projected budgets several years in the future and decided instead to focus on the immediate issue of balancing the coming year’s budget.”

Next years’ proposed college budget includes an 11 percent increase in the financial aid budget, from $41.6 million this past year to $46.2 million next year.

Wheaton sees this year-focused budget process as a temporary measure in response to this unexpected increase. The general projections for 2014-2018 made this year, which do not include specific recommendations as they usually do, show a projected 2.1 percent increase in revenue to a 2.7 increase in expenses. Wheaton explained that this projected deficit would be dealt with in future budgets.

“That will not last,” he said.

“We’ll take steps to balance all future budgets, but we’ll want more information before we decide what those steps need to be and when they will be taken,” Wheaton added in an email.

The endowment draw has also created a strain on the budget in recent years, as it has remained relatively stable with for the last four years. The draw is calculated by taking five percent of the average value of our endowment over the previous four years, meaning the endowment draw is still being affected by the 2008 financial crisis.

Next year’s estimated endowment draw is $31.1 million, a slight decrease from this year’s endowment draw of $31.5 million. According to Wheaton, this stagnancy leads to a strain on the budget because expenses such as salaries and facility maintenance costs are steadily increasing.

According to Wheaton, Macalester has been effectively been in a hiring freeze since the financial crisis, based on their modeling for future budgets.

“We haven’t added new positions since the crash,” he said. “We’ve been very tight on headcount.”

The hiring freeze is projected to continue from 2014 to 2018, though Wheaton emphasized that this is not set in stone and could change if economic conditions change. At the same time, Wheaton pointed out the trade-off between hiring new staff and retaining benefits for existing staff.

“It’s been a big theme over the last several years to preserve available dollars for existing employees,” Wheaton said. The proposed budget also includes targeted cuts to programming administered by the college, ranging from the President’s office to the Department of Multicultural Life. Wheaton said that these targeted cuts were designed to affect student experience as little as possible in a way that across the board general cuts would not allow for.

Wheaton cited the library and media services as example. Since the library forms “the intellectual heart of the college” and is a student space used by nearly everyone, its budget was cut by only one percent, or $15,500 of its $1.55 million budget.

The budgets of the departments in student affairs, which include the office of the Vice President, the Dean of Students, the Career Development Center, the Chaplain, the Dean of Multicultural Life, Health Services and Athletics, were cut by a uniform three percent.

Laurie Hamre, the Vice President for Student Affairs, wrote in an email that she will be meeting with an ad hoc group of students representing MCSG and the Student Affairs Advisory Committee on Friday to discuss the specifics of administering the Student Affairs budget next year. This meeting comes after Hamre surveyed the MCSG legislative body meeting about student priorities last Tuesday.

“It would be premature for me to identify specifics prior to meeting with the ad hoc group,” Hamre wrote. “Our goal is to find places where budget reductions will not have a negative effect on the student experience.”

The overall college program budget was decreased from $12.2 million to $11.9 million, a three percent cut.

Despite stagnant endowment growth and a spike in financial aid spending, next year’s tuition and fee increases, announced several months ago, are in line with recent increases.

Wheaton said this increase was lower than that of many peer institutions, whose increases were “between six and seven percent” this year. According to him, keeping the comprehensive fee increases below four percent is a goal in the budget process.

The proposed budget will be voted on by the Board of Trustees on May 17. Though the board releases financial forecasts at each of their meetings, they do not make recommendations on allocations for specific items.