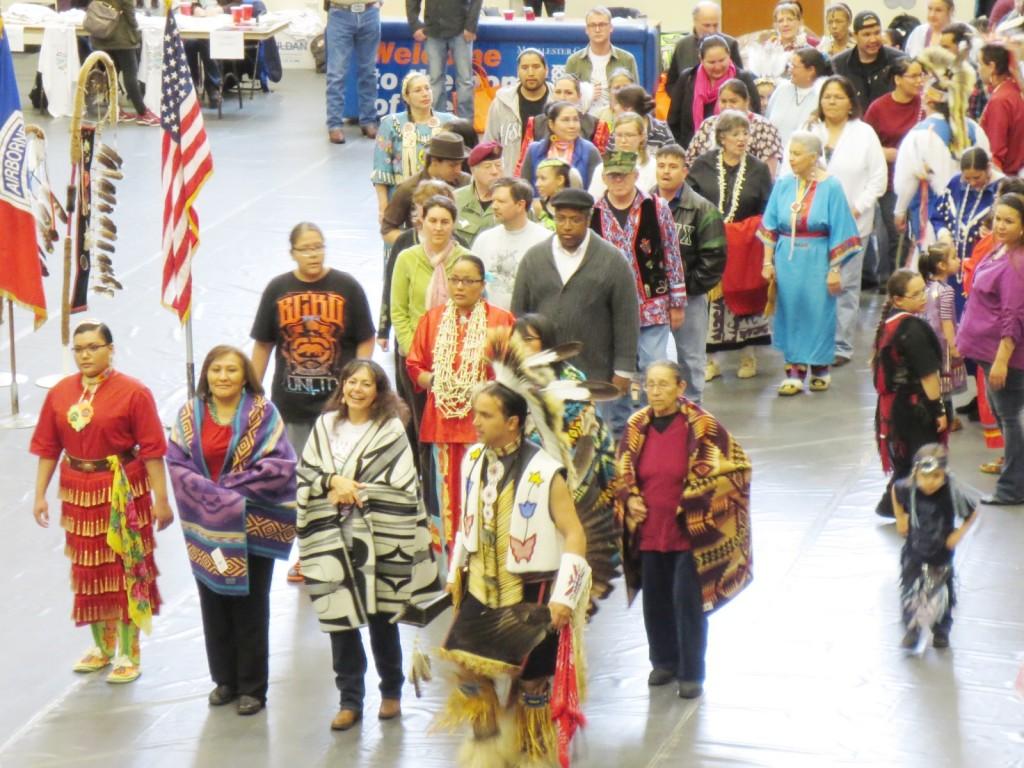 Native American alumnae wearing the pendeltons they were given during the honor song. Two of the alumnae were part of the group of students who planned the first pow-wow at Macalester in 1989. Photo by Abaki Beck ‘15.

The sound of drums and song echoed from inside the Alumni Gym in the Leonard Center last Saturday, as around 300 spectators from Macalester and the broader community intermingled with vendors and dancers from around Minnesota. Organized by Proud Indigenous People for Education (PIPE), it was the first Macalester pow-wow in 20 years.

The event began at noon with a Grand Entry marking the beginning of the festivities. All the dancers were led in by a color guard of veterans, who place flags and an Eagle staff in the center of the arena. After the Grand Entry, President Brian Rosenberg gave an opening speech.

Around 100 dancers and seven drum groups, or drums, were featured, along with 10 vendors, including the popular food truck Frybread Express. The host drum was Standing Bull. Though many attendees were there to watch the dance, one of the organizers of the event, Abaki Beck ’15, emphasized that a pow-wow is “not a performance, but a social event.”

“The pow-wow was very different from events that other cultural orgs host because it was something truly anyone can participate in; unlike a performance or something,” Beck wrote in an email. “We did a round dance, which is a dance that anyone (literally, anyone) can participate in, that a lot of students participated in, so that was great.”

Most of the dances performed were what are called intertribals, dances where participation is more open than other dances at pow- wows where dancers compete for monetary prizes, such as the men’s “Grass” dance or the women’s “Jingle” dance.

During the pow-wow, there was an honor song for the four Native American alumni present at the event, two of whom played a role in the original events two decades ago. During the dance, which involves marching in a circle around the honorees as a drum plays, they presented all four with pendletons, patterned ceremonial blankets used to commemorate life milestones and important events.

Students who attended the pow-wow, like David Rao ’14, were impressed by both the event itself and the logistical skills of PIPE, whose three members (Beck, Ajuawak Kapashesit ’13 and Brook LaFloe ’15) organized the large-scale event.

“It was great to see the event come together so well and to see the Leonard Center transformed into such a vibrant, interactive space for a day,” Rao wrote in an email. “I was surprised that Macalester had not held a pow-wow for 20 years and I hope last Saturday revives that tradition. Much respect to everyone in PIPE; they did an amazing job.”

Setting up the event was no easy task. In total, the budget was $10,000. Meeting this funding goal was made more complicated when PIPE was denied the Tiwahe Grant they had applied for, but they were able to make up the difference with funds from the Department of Multicultural Life, a few academic departments, MCSG, and the Shakopee, a community in the Dakota tribe.

Though $10,000 is an initially impressive figure, Beck emphasized that given the scale of the festivities Saturday’s event was “actually a really low budget pow-wow.”

Planning for the event began in the fall semester, when PIPE met with alumni—including LaFloe’s mother Janice LaFloe ’92—several of whom were involved in the original pow-wow events.

According to the archives of The Mac Weekly, the first pow-wow was held in 1989 as part of Native American Awareness week. It took place over two days with three Grand Entries. The week included a fashion show featuring local musicians and dancers as well

as a reading from N. Scott Momaday, a Native American author of Kiowa descent who won a Pulitzer Prize for his novel “House Made of Dawn.”

In the spring, Kapashesit and Brooke LaFloe secured the MC, arena director and head dancer for the event, while Beck focused mostly on advertising and outreach. Though the event was publicized on campus through email announcements and posters, as well as the group’s “Ask an Indian” Youtube video based on responses to anonymous questions, Beck focused mostly on the broader Minnesota Native American community.

“I gave out posters to youth in the youth programs at the Division of Indian Work (where I volunteer), as well as got on the listservs for the Indian Education program at St Paul Public Schools, the American Indian Listserv at the University of Minnesota (which goes to people across the state), and the Augsburg American Indian listserv,” she wrote. “I tried to focus our advertising on schools and afterschool programs because we wanted a lot of youth coming to campus. “

She also hoped that the community interest, especially from youth, could hopefully “get kids interested in applying here some day.”

“A lot of students don’t know what a pow-wow is or don’t know anything about the tribes in this area, or Natives in general,” Beck wrote.

Though Beck does not expect the pow-wow to happen again next year, as Kapashesit is graduating and both LaFloe and herself will be abroad in the Spring, she expects to revive it during her senior year and sees this year’s event as an overall great success.

“The pow-wow was a bigger success than I had imagined,” Beck wrote. “The planning process was really hard and at times I was like, ‘Oh my god, we can’t do this. Why did we think we could do this?’ But a lot of dancers came, a lot of students came, and a lot of general community members came. We received a lot of good feedback, and a few people came up who had gone to the pow-wow 20 years ago and said that they were really happy we had revived it!”

“But seriously, it was so much work,” she added, “You don’t even know.”