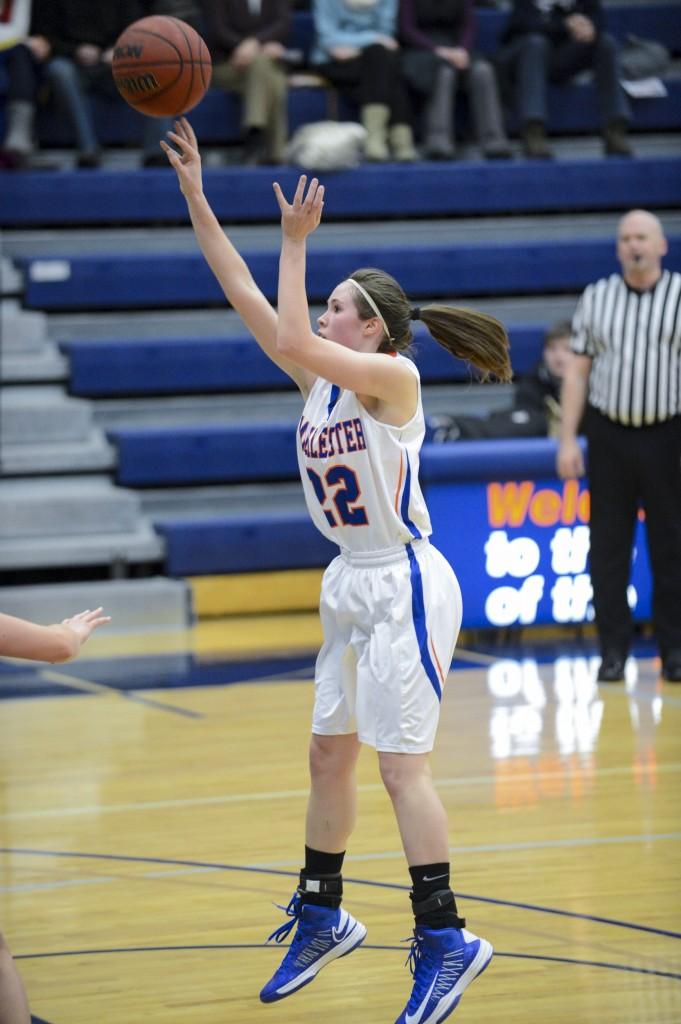 Kathryn Medinger ’14 takes a jumper against Bethel on Jan. 19. Despite their recent 14-game losing streak, the Scots look to end the season on a winning note. Photo Copyright Christopher Mitchell / SportShotPhoto.com

Despite a promising start to the season, the women’s basketball team has not had the year it hoped for. The team got off to a quick start in conference play in its first five games, beating MIAC foes St. Olaf, St. Catherine and Augsburg and narrowly losing to St. Thomas and St. Benedict. These games are made all the more impressive considering the talent of the conference.

“The MIAC is a very strong league, one that is difficult to win when playing young and inexperienced players,” head coach Ellen Thompson said.

Consequently, the Scots’ schedule has been a doozy.  St. Thomas has been in and out of the DIII Top-25, and Concordia, St. Benedict, St. Mary’s and Gustavus all have over 10 conference wins.  Against this elite competition, the team has struggled as of late, dropping its last 14 games.  Still, despite this losing streak, the message for the future is team consistency and an optimistic attitude.

“Coming into the season, we returned one starter,” guard Taylor Pike ’14 (Ashland, NE) said. “A lot of the team hadn’t seen much action on the court until this season.”

That said, Pike still made no excuses.

“Obviously we’re still preparing for each opponent, and our goal is still to win each game,” she said.

The team has three remaining opportunities to meet this goal, playing Carleton, Augsburg and Bethel in the next seven days.  Even if the team is unable to sweep these games, there still is reason for optimism.  Although star guard Kyanna Jones ’13 (Brooklyn Park, MN) leads the team in scoring, she is the only player graduating this year.  Seven juniors look to pick up the slack, including Veronika Jakubovie ’14 (Maple Grove, MN) and Pike, the team’s second and third leading scorers.  Jakubovie is also the team’s leading rebounder and shot blocker.  Furthermore, Pike scored 39 points in the team’s two games against St. Olaf, demonstrating an ability to score at an elite level.

The plethora of juniors on the team is hoping to use this year to gain experience after last year’s exodus of talent. As a result, the team will likely be one of the most experienced teams in the MIAC.

In addition to its veteran leadership, the team also can look to two competitive contests against conference-leading Concordia-Moorhead (16-3) on Feb. 2 and third place St. Mary’s (15-4) on Feb. 6 for optimism.

The Scots played the Cobbers to the wire in the first half, trading leads with them and entering the half with a surprising 26-24 lead. While Concordia-Moorhead went on to win 66-45, the Mac women put them in an uncomfortable position.

In a narrow loss to St. Mary’s at home, the Scots took a six-point lead into halftime against the talented Cardinals squad and built up a 15-point lead with nine minutes to go. Defense proved to be the key as they limited Jamie Stefely and Jessica Thone (the two leading scorers for St. Mary’s) to 20 points on 7-27 shooting.  Although the late game collapse was obviously not what the team wanted, a game like this is definitely something that the team can use for inspiration next season.

Consequently, the team has lofty goals for the future. Perhaps Erin Murray ’16 (Sparta, WI) put it best: “Eventually, we want be that team that makes every opponent we play think at the end of the game: ‘We hate playing Macalester.’”

The team next plays at 1:00 p.m. on Feb. 9 against Carleton at the Leonard Center.