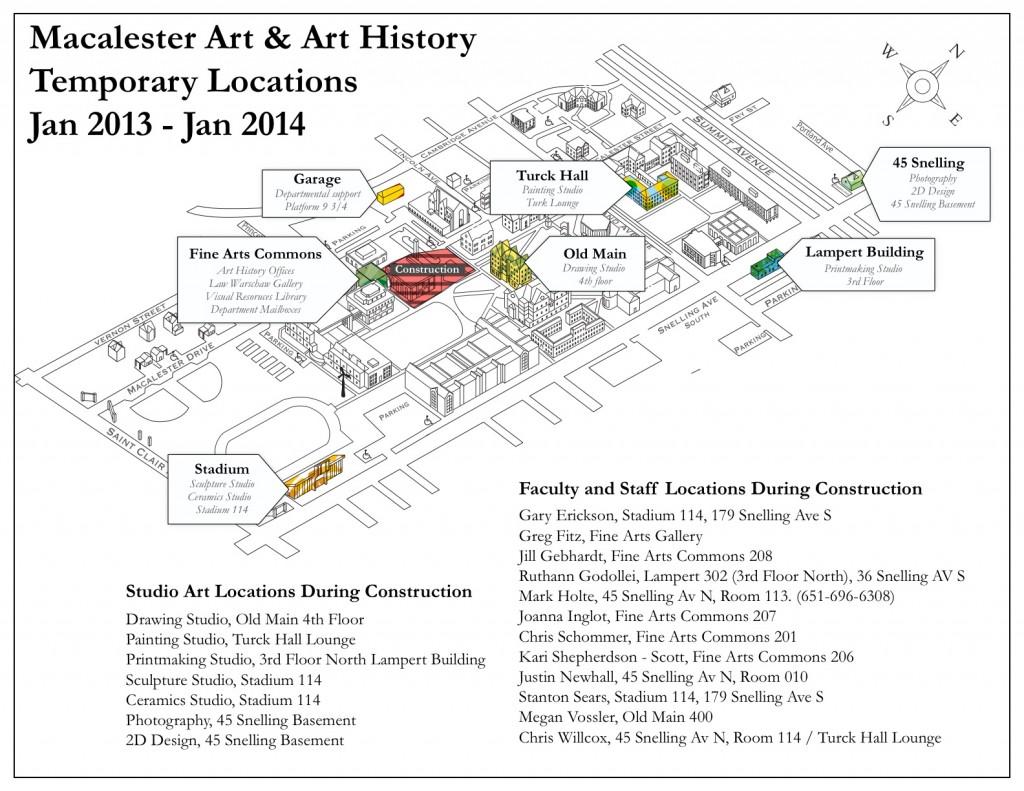 Map courtesy of Chris Schommer of the Art Department.

After several years of discussion, construction has finally commenced on the new Fine Arts building. A chain-link fence cordons off the old building and the first signs of construction are visible: steel braces have been secured at the tops of the exterior pillars and a large trench has been dug around the foundation.

The old building, which housed drawing, painting, ceramics, printmaking and sculpture studios, along with a bronze foundry and a wood shop, now stands empty. While community members shouldn’t expect the space to accommodate art making until January 2014, the department is anything but diminished.

Studios can be found tucked away in the farthest flung corners of campus. Ceramics, sculpture and architectural drawing studios are temporarily housed in the stadium, under the Veggie Co-op. By some sort of Houdini-esque magic, about a dozen pottery wheels, an almost complete woodshop, a classroom and sizeable amount of working surfaces have been fit into the space. The drawing studio is now nestled at the heart of campus on the fourth floor of Old Main next to Women’s, Gender, and Sexuality Studies. Also close to the hub of campus lies the painting studio, which now resides in the old “Turck-Out” lounge. The printing studio is now located on the other side of Snelling, above Common Good Books and the Macalester Bookstore. At the other end of campus, barely still “on campus,” is 45 Snelling, where digital photography and possibly senior seminars will be held. The space, while ample, still feels very much like a dentist office it once was, from the myriad of small examination rooms to the sprawling receptionist desk that takes up the majority of the entry room. For more help in finding the temporary studio spaces see the map pictured below.

Since the Art Department currently lacks the physical cohesion offered by a single edifice, you can expect to see more art students hanging out in Janet Wallace (or “J-Wall”) than usual. The department hopes to continue to foster its wacky sense of community by hosting more department activities in Janet Wallace. The most anticipated event is the Senior Art show this spring. It will be the first student show to grace the walls of the new gallery—which is debatably the gem of the Janet Wallace crown.

Though spread far and wide, the temporary studio spaces aren’t necessarily negative. In fact they offer many new opportunities as far as specific bodies of work are concerned. In sculpture for instance, the limited space will force an emphasis on smaller, more intentional sculptures and the creation and use of models. Since the new drawing studio has much less in the way of ventilation than the previous studio space, students will be working less with powdered charcoal and presumably will be using mark-making tools that produce sharper lines (different than the softer look of powdered charcoal).

The newly dispersed spaces also offer an opportunity for community members to stumble upon student work that otherwise might have gone undiscovered. If you’re curious, ask an art student to show you around.

And obviously the largest pro of the temporary studio spaces is what they signify: a beautiful, spacious future arts building filled with state-of-the-art (no pun intended) equipment, ventilation and classrooms.