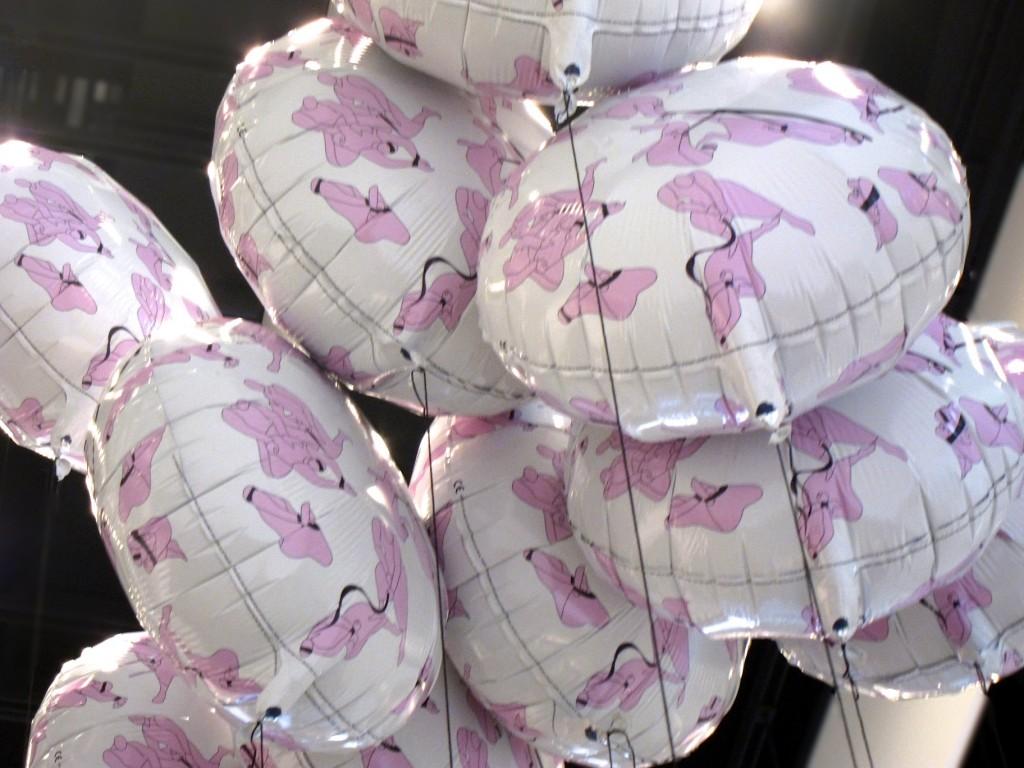 Standing outside of Parastou Forouhar’s exhibit, Ornamentation and Crime, currently on display at the Law Warschaw Gallery, you might think that you’re standing outside of a glass funhouse of butterflies and balloons, designed for children to play in and explore. Balloons tied to strings at least ten feet tall are attached to free-moving washers, inviting you to venture through, as if in a forest of tall grasses. A central wall covered with large, intricately patterned butterflies joyfully calls out to be admired.

But the closer you get to these seemingly playful expressions of color and pattern, the more you start to question them. What are the strange, distorted shapes on the pink balloons? Draw one down to eye level and see that they are bodies, twisting and contorting in acts of violence and aggression. A similar motif on the butterflies – bodies in forced submission, in positions of torture and agony.

The acts of human depravity depicted are some that the artist herself witnessed during the political and social upheaval of the Revolution in Iran. Forouhar studied art at the University of Tehran, then moved to Germany to continue her studies at Offenbach College of Art in 1991. In 1998 while still residing abroad, her parents, political revolutionaries, were assassinated. Forouhar’s familial connection and the controversial art she produces make returning to Iran a dangerous undertaking.

Forouhar uses an intensely stylized, ornamental aesthetic to draw the viewer into her work. This distinctive body of work also pays homage to the highly ornate tessellations that are typically associated with the Middle East. Pay close attention to the detailed, patterned digital drawings on display and leaf through pocket-sized flipbooks similar to those you might have made in grade school. Forouhar uses bright color and geometry to allow the viewer to enter into a visual dialogue with the patterns of violence and aggression that continue today, both in her home country of Iran and in the rest of the world.

The gallery is a relatively small space, and the media on display may initially appear underwhelming. However, Forouhar’s work merits close inspection and deep thought. How have we come to live in a world where terrible violence flits in and out of our daily lives as carelessly as a butterfly?

Ornamentation and Crime is on display at the Law Warschaw Gallery in the Janet Wallace Fine Arts Center through March 10th.